I am a cautious hybridizer by nature. I cross similar colors with each other, related genetics with each other, only plant an average of 3-5 seeds of a given cross on new genetics, etc. Every once in a while I will fall in love with a new, unproven seedling and use it heavily on many of my mamas - but still just 3-5 seeds a cross, and usually only up to 100-150 seeds in total with the new genetics. If the seedling proves itself - like 47607 has - I might increase that to 600 or more the following year (with it and its kids).

This year, for the first time since I began hybridizing in the mid-90's, I am making a huge bet on a new seedling (52708 pictured below). 10% of the seeds I will plant in May will have it as the pollen parent. 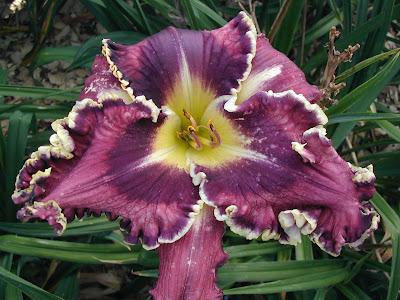 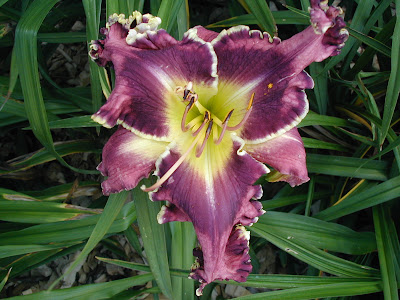 Unfortunately, 52708 may have a big flaw - in its first year its ruffles got tangled up 50% of the time (plus some of the blooms had spotty days - probably from dew). I collected pollen like crazy and later decided to bring it into the greenhouse to use as a pod parent as well - something I have never done before - once a plant is outside, it stays outside until its evaluation is done. It turned out to be so dormant that it lost it's wonderful scape in the greenhouse - but the ruffles settled down. It's back outside now to start the testing process all over again, but I have what I want from it - the seeds:-) In my next post I'll show pictures of what I crossed it with the most. And this year, I'm not limiting myself to planting just 3-5 seeds of a given cross.

My goal? Lots of new hardy seedlings with fancy flowers in the 8" range (other than Entwined in the Vine, most of my seedlings seem to max out at 7") with good height and great plant habit.
Posted by Karol at 2:04 PM