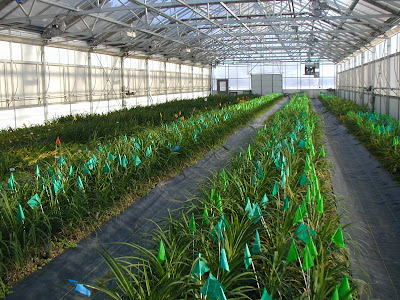 After giving the greenhouse a month of chill time in December (min temps at 35 and max at 50 - would love to take it 10 degrees colder, but below freezing temps inside impact the structural integrity of the greenhouse and freeze the pipes), it is now time to take up the temps and begin the new season:-) A couple of hours ago I increased the minimum temp to 50 degrees and will be setting it higher in coming weeks.
This year the greenhouse includes a little more than 5000 sdlgs (see earlier blog posts for what I planted), past intros plus those for 2012 and 2013 (including the gift plants for the 2013 national convention) and some for 2014. I brought in only a handful of other "mama" plants, as I wanted to leave all my sdlgs outside for testing and thought it would be a great test to use one of my proven intros in each cross to improve hardiness. But I did bring in a lot of pollen from special seedlings:-)
You will notice a lot of green flags - I use those to tell me where my white marker tags are, indicating each cross. There are lots of flags, as I like to do short crosses (usually 3-5 seeds of each). Many of the seedlings are already blooming size - it really helped to plant them June 1 - a couple of months earlier than usual. I'm hoping to see a much larger percentage of bloom.
The next picture shows the different types of foliage of my introductions. It is hard in Minnesota in the spring to figure that out sometimes since it is so cold and the snow leaves so late. And there are lots of sdlgs to keep track of. But the differences are obvious in the GH - the yellow in the foreground is a dormant, and the one next to it is an Ev or Sev - it is very hard to tell the difference. 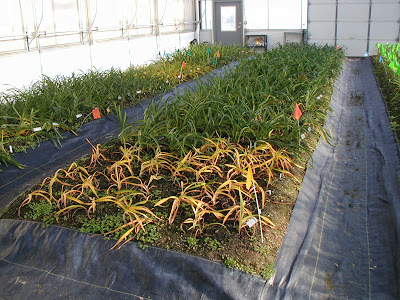 The picture below shows sdlgs where there is a lot of dormancy - the pollen parent is the same in this whole bed (while I don't do long crosses, I do make big bets on pollen parents, using them on many pod parents) 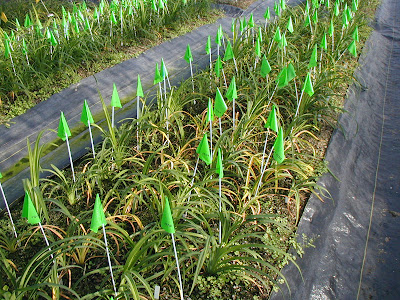 Some genetics produce mostly Ev and Sev seedlings, as in the picture below. I have found many of them to be just as tough as the dormants. 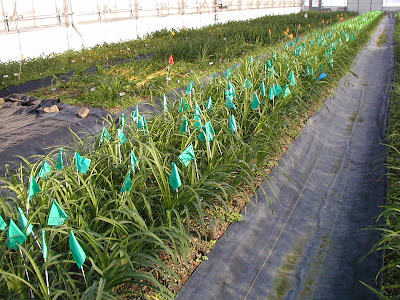