Scapes are starting to pop up everywhere in the greenhouse, and it is looking like I might see some bloom by Easter or shortly thereafter. Bloom seems like it will be a bit later this year than usual - perhaps because of the many cloudy days and cold temps. A large percentage of the seedling scapes that are coming up are from 1312 breeding, which makes sense because it was one of the first of the new seedlings I saw last year (and one of the first mama plants sending up scapes this year). I have found a strong correlation between the timing of a parent's bloom (early vs. later) and that of its offspring, and should probably work that harder when making crosses in order to get plants that bloom earlier, as so many of mine are late-mids. 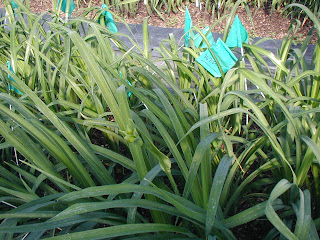 The picture below shows how lush the foliage is right now. A strong tendency in the greenhouse for it to grow vertically and very tall. Fortunately, the scapes are also taller than they would be outside. 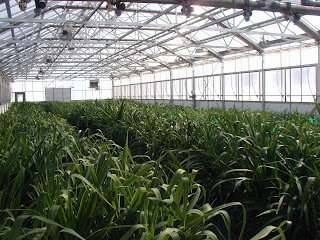 Two days ago I saw something I have never seen here before - huge white swans soaring by and then landing on our pond. What a beautiful sight. Later they started exploring on land, and it was fun to watch them try to gingerly walk on the ice - usually successfully, but sometimes then sliding around. 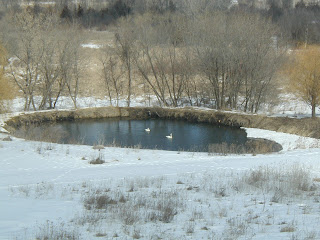